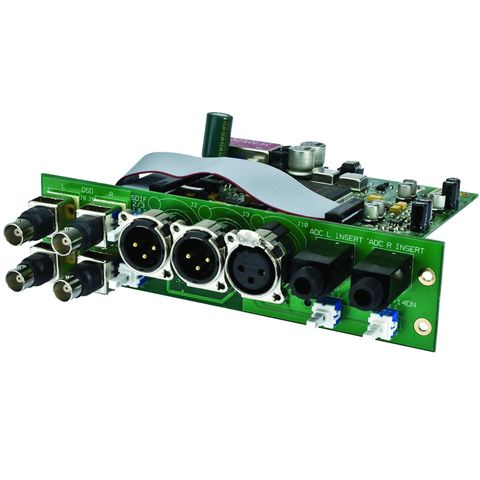 The 8816ADC is a high-quality stereo analog-to-digital converter option card for the AMS Neve 8816 summing mixer that supports PCM sample rates up to 192kHz plus DSD, with sync inputs on AES3 and word clock.

The 8816 has two sync inputs; one is a single AES3 female XLR), the other is word clock with a BNC connector. If no sync input is present, the 8816ADC will synchronize to its internal crystal clock. If one or the other sync inputs are present, the AES or WCK led will illuminate red showing that that sync input type is detected. When the correct sampling frequency is selected, either the WCK or AES led will light solid green to show that sync is being received and the unit has successfully locked to it. If both sync inputs are present and valid, the word clock input takes precedence over AES as the reference. Normally the sync input is set to the required sample rate. In this case both AES out 1/L and AES out 2/R carry the same stereo AES signal converted from the unit’s left and right analog outputs.

Selecting DSD will default to 44.1kHz reference. If no sync is available it will use its own internal crystal reference. The interface requires a minimum of two BNC cables (DSD left and DSD right) to the DSD recording device. The DSD output is switchable between SDIF* 2 and SDIF 3 with a rear panel switch. SDIF 2 requires a 44.1kHz sync signal to be passed to the DAC and this should preferably come from the 8816 sync output via a third BNC cable. SDIF 3 transmits the DSD signals with clock information included and should not need the sync signal.