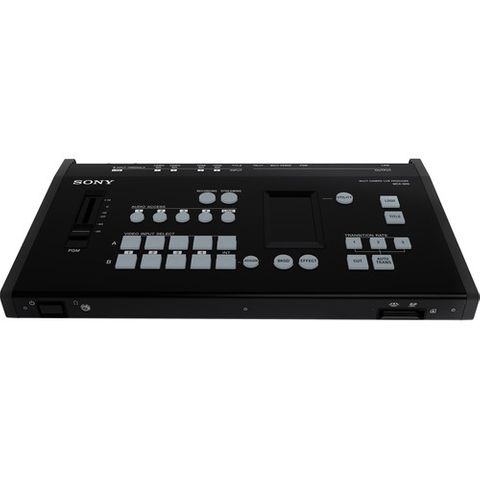 Sony's MCX-500 4-Input Production Streaming/Recording Switcher is much more than just a portable four-input switcher. It is a global system that supports both 60 and 50 Hz production formats, so you can work with it virtually anywhere in the world. Four 3G-SDI inputs, two HDMI, and two composite (CVBS) inputs each feature a discrete frame synchronizer, allowing you to mix input sources. The unit internally processes the input footage at 1080i.

The MCX-500 combines a manual control surface with a touchscreen LCD that you can control locally or from a networked device. As you would expect from a professional mixer, cut, mix, wipe, and key effects are built into the unit. In addition to the program and multiview preview outputs, the switcher can also live stream to services such as Ustream via Ethernet, without requiring additional hardware. Likewise, the MCX-500 can record the program stream to an SD card, which is not included, via the built-in SD card slot. Beyond just the video switching capabilities, it is also a 5-channel audio mixer. You can control the switcher remotely via Mac, PC, or a tablet.