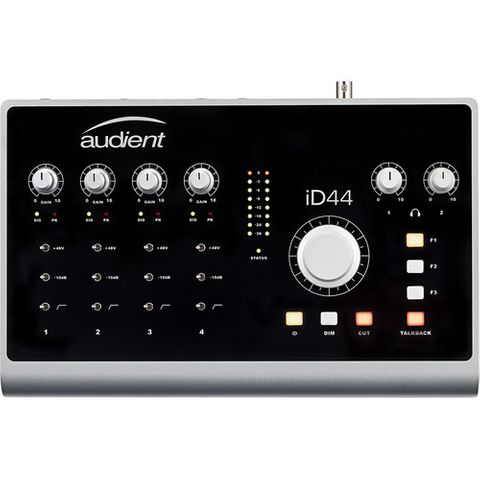 Building upon the success of the iD22, the Audient iD44 High Performance AD/DA Interface & Monitoring System was designed to cater to engineers and studio professionals who want to integrate the recording interface into a larger studio setup while still leveraging four of the company's renown Class-A console grade microphone preamplifiers. Housed in a desktop style chassis, it transforms your DAW into a world-class recording system by connecting directly to your microphones, computer, and monitors.

The iD44 includes two harmonically rich JFET DI inputs, which are designed to replicate the input stage of a classic valve amplifier. Two fully balanced insert points enable you to integrate your favorite outboard equipment prior to conversion. The insert return gives you direct access to the analog-to-digital converters, providing the cleanest signal path possible and making it great for print-backs or integrating outboard analog line-level sources. Two independent headphone outputs allow for two separate cue mixes, allowing artists to setup a monitor mix that will help them perform to their highest potential.

The iD44 is equipped with two Optical input and output connectors, which offer plenty of options for expansion. Supporting both ADAT and S/PDIF, iD44 enables you to add up to 16 mic preamp channels to your setup for larger sessions like tracking a live band. The Audient iD44 ships with a power supply, a standard USB cable, and a USB Type-C cable.