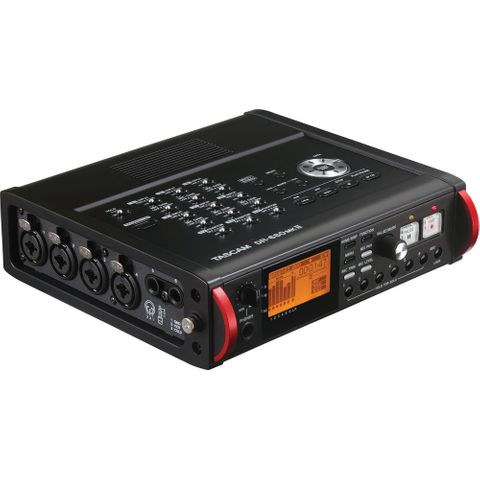 The Tascam DR-680MKII Portable Multichannel Recorder allows you to simultaneously record up to eight tracks at 96 kHz/24-bit in the studio or in the field. The unit features four XLR/TRS combo inputs with phantom power, two 1/4" TRS inputs, and a digital input for added versatility. You can use multiple mics to record live music, events, or surround sound effects. If you don't need the digital input, the unit can be reconfigured to record a two-channel mixdown of the other six inputs on channels 7 and 8.

For audio quality, the recorder features High Definition Discrete Architecture (HDDA) microphone preamplifiers, each with a differential amplification circuit that has been optimized for sound while providing an optional +48V phantom power for use with condenser microphones. The unit can record in WAV, as well as BWF (broadcast wave format), which stores the recording start times as metadata. It can record eight channels in WAV/BWF format at 96 kHz/24-bit (6 tracks + stereo track) or two tracks at 192 kHz 24-bit. Recording MP3 files with up to four channels is possible at 96, 128, 192, and 320 kbps. The inclusion of MP3 as a file format option allows for the efficient use of storage space during long recording times. Stereo and mono files are both possible.

The device includes built-in coaxial digital input and output (S/PDIF, AES/EBU) and six unbalanced line outputs. By connecting a mixer to the outputs, the unit can be used as a 6-track playback device. A built-in mid-side decoder allows for the use of mid-side stereo microphones, with the option of setting the 1-2, 3-4, and 5-6 channel pairs independently. The decoding process is available during recording and when monitoring. Multiple units can be cascaded together to increase channel count with a common master REC/PAUSE button for all units in the cascade. A GANG function allows for the input TRIM, Pan, and Level controls of multiple channels to be grouped and operated simultaneously. The unit's compact and rugged construction helps resist external vibrations and environmental conditions while recording to SD, SDHX, or SDXC cards. A shoulder strap is included and the front features a built-in folding stand for tabletop use. The unit can be powered by the included AC adapter or by eight alkaline, NIMH, or lithium AA batteries.