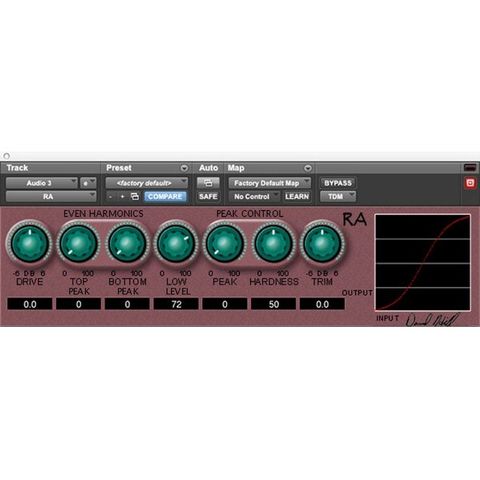 RA is a Nonlinear plug-in for the professional Audio Engineers that demand the most from their plug-ins. The plug-in can be thought of as an amplifier that is being over driven, (Wave Form Compression), but there is control over what part is being overdriven. An analogy from photography, it is like the curve function.

The controls in RA are divided into 4 groups.

The first and most useful control is the LOW LEVEL control; it is in the middle of the graphic. This control brings up the low level content of the audio. It may also be thought of as a detail control. It functions like an amplifier being over driven, but works more on the low level part of the signal and less on the high level part. This control generates third harmonic distortion. The LOW LEVEL control can also have a multiplying effect on other plug-ins by increasing their effect.

The LOW LEVEL control is useful on most any kind of signal and is a little like upward compression with out attack and release times. Try is on a vocal and listen to the dynamic change.

The second control group is the PEAK controls. They are like an adjustable soft clip, or an amplifier where you have control over how it saturates, but leaves the low level part of the signal alone. The distortion generated by the PEAK controls is third harmonic. The PEAK control rounds off the peaks of the wave shape and has a hardness value that can be changed. The HARDNESS control's soft setting (0) limits the peak to approximately -3dbfs and the hard setting (100) limits peaks to approximately -10dbfs.

An example to try; take a track with a snare drum that peaks in the range of -3dbfs. Set the LOW LEVEL, PEAK and HARDNESS controls to max. Look at the meter, what you should see is a peak reading around -10dbfs but it should be louder with the plug-in engaged as compared to bypass.
It is also useful in preventing an occasional over.
The next control group generates even harmonic content. These controls are the most difficult to hear and describe. Being that the second harmonic is an octave. In a test some people did not hear 50% distortion if it is only second harmonic. But it does change the feel of things and can have a thicking effect. The TOP control rounds off the top of the wave shape and the BOTTOM control rounds off the bottom of the wave shape. When used together it is possible to have the even harmonic content cancel and have third harmonic distortion left.

Try one of these in conjunction with the LOW LEVEL control on an acoustic guitar, bass or kick drum. You may have noticed that on some recorded tracks that the waveshape can have a shift or peaks on only it's top or bottom edge, this is a result of even harmonic content

The last group has two controls are more like house keeping. The first control which is in front of the signal processing is a DRIVE control that has a plus and minus 6 db range. Being the distortion generator is level dependent, this will allow for a more or less aggressive operation of the process and the ability to better match the process to the track. The DRIVE control is also unity gain from the input to the output. However if you have a -1dbfs signal and increase the drive gain to +6 db you will clip and the clip light indicator will turn red.

The last control of the plug-in is an output level trim which has a range of plus and minus 6 db for matching gain. Clipping the signal with the trim control will light the clip light indicator, but the coloring controls cannot clip. The main use of the LEVEL TRIM is for level matching, being the curve bending is very non linear it is not possible to have a fixed unity gain.

The graphic display shows how the signal is being distorted and is useful in the prediction of what the plug-in will do. The controls are interactive which means each one will affect the process in front of it. Think of the curve display in a graphics program