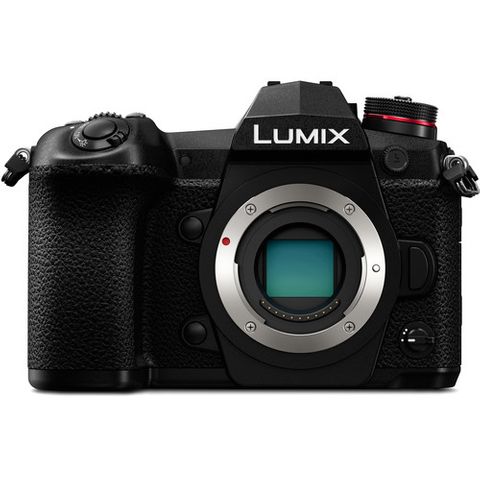 Panasonic has taken a different approach to camera development with the stills-focused DC-G9 Micro Four Thirds Mirrorless Camera, which has a variety of newly developed functions and features that will appeal to photographers. Central to the imaging process is the combination of a 20.3MP Live MOS sensor and the latest Venus Engine processor, enabling the capture of sharp images and video with sensitivities ranging up to ISO 25600. Extremely fast speeds are also made available with up to 60 fps continuous shooting with the electronic shutter function. If you want to shoot video along with stills the G9 is very accommodating, offering UHD 4K at up to 60p.

This improved speed is seen in many different aspects, including an enhanced Depth-from-Defocus autofocus system with 225 areas for fast, precise focusing across the frame. A rear joystick has been implemented as well for intuitive control over the current focus point. Another benefit of boosted processing is the inclusion of 6K PHOTO at 30 fps and 4K PHOTO at up to 60 fps, allowing users to capture 18MP or 8MP images, respectively, at exceptional frame rates. Beyond speed, the 5-axis sensor stabilization system supports Dual I.S. 2.0 and can compensate for up to six stops of camera shake. And a significant addition made possible with this new system is a multi-shot mode that captures eight separate images and compiles them into a single 80MP raw image.

It isn't just performance that has been optimized, as the G9 has a redesigned body that is splash, dust, and freezeproof. The body gains a top status LCD for quick access to essential settings without needing to check the LCD or viewfinder, which have also been improved. Most notably, the OLED viewfinder is improved with a 0.83x magnification and 3.68m-dot resolution. The EVF has a fast 120 fps refresh rate as well for lag-free viewing. Additionally, the LCD is now a 3.0" 1.04m-dot free-angle touchscreen for working intuitively and at odd angles.