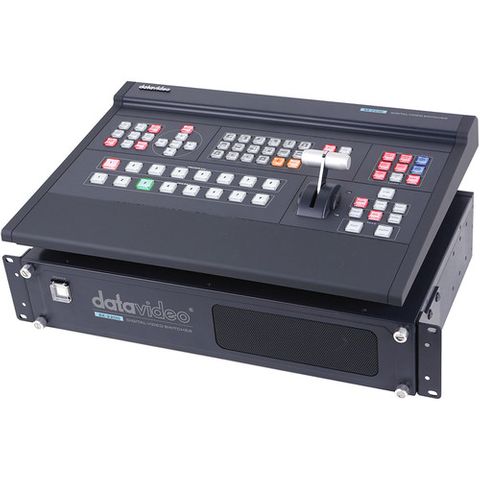 The Datavideo SE-2200 HD-SDI and HDMI Video Switcher is a 6-input switcher consisting of control panel and separate rack-mountable processing unit. It accepts resolutions up to 1080i60 from a combination of six HD-SDI and two HDMI inputs. The HDMI inputs work with DVI computer signals, while the SDI inputs are useful for long capable runs and connecting professional video equipment. All of the inputs are re-assignable. The SE-2200 has six assignable HD-SDI outputs and two HDMI multi-view outputs. The SDI outputs can be Program, Program with Logo, Program with Logo and Titles, or Preview. Dual Picture-in-Picture support lets you display up to two other video sources in smaller screens over the main program output. In terms of audio, there are four XLR mono inputs (two stereo pairs) and two XLR mono outputs (one stereo pair). The switcher also supports audio embedding to the HD-SDI outputs. A built-in TC-200 Character Generator lets one of the HDMI inputs be used to accept video from a computer with Datavideo's CG-200 software installed for title creation. You can also bring in graphics from presentaion software, such as PowerPoint, and take advantage of the switcher's Luma key feature.