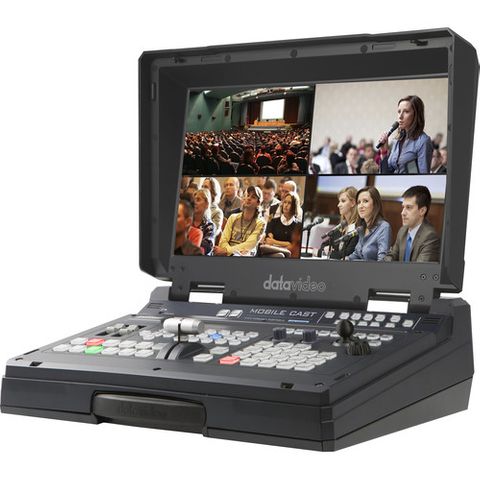 This Datavideo 4-Channel HD/SD HDBaseT Portable Video Streaming Studio is a hand-carried mobile studio that leverages HDBaseT technology to control up to three PTZ cameras. It features three HDBaseT connectors that can control connected cameras and accept video inputs, as well as one HDMI input. Three HDMI program outputs allow you to connect to monitors to display your program, and the streaming output connector lets you stream live. Depending on the data rate of your stream, you can also record to an optional SD card.

The HS-1600T packs into a single unit that looks like a briefcase, but when opened it reveals a monitor built into the lid, switcher controls including a T-bar for transitions, a joystick, audio sliders, and a host of buttons for controlling your show. The monitor supports multiview mode, while the HDMI and streaming output support your program out. The HS-1600T supports popular mix effects including picture-in-picture, wipe, mix, and fade, and it incorporates one upstream keyer. It can also send red and green tally signals via the built-in tally connector. The built-in real-time encoder enables live streaming, and you can stream and record your program at the same time.